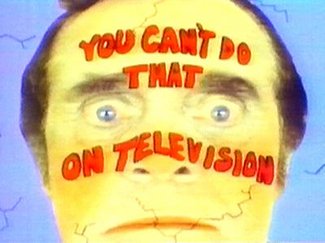 You Can’t Do That On Television was a sketch TV show, by young amateur actors, in true classic Nickelodeon style.   It featured pre-teen and teenaged actors in a sketch comedy format similar to that of the United States Rowan & Martin’s Laugh-In and Saturday Night Live. Each episode had a specific theme normally relating to pop culture of the time. The show was notable for launching the careers of many performers, including alternative rock singer-songwriter Alanis Morissette, and screenwriter Bill Prady.

During the early days of massive cable, “You can’t do that on Television”, was a show that was done in the Ottawa area for a new station in the States called Nickelodeon, which was nothing but this tiny kid’s network at the time.

There were two producers, who will remain nameless, who had success with the show. It was being done locally out of CJOH and Ottawa and they were writing the shows themselves.

Myself, Rick Jones, Daniel Lamont were involved in comedy and we want to be comedians. We wanted to write comedy stuff. At the time we and a whole bunch of other people with comedian backgrounds were brought into a writer’s room by the lead writer Barry McLaughlin. He had done a show called, “Shhh It’s The News,” back in 1968, he was a man who understood comedy.

We all started writing bits for, “You Can’t do that on Television,”. The idea was we had to come up with themes, like “doctors,” and within that theme, there was a formula we had to follow in these sketches. We had to do two slime sketches with the punchline. “I don’t know,” and then the kids would get slimed – it would be about a half hour.

Over time most of the other 10-12 other writers fell away. Myself, Rick, and Dan ended up being the go-to people for these particular seasons on “We Can’t do that on television.” Rick eventually went on his own way and Dan and I continued writing for the show. We ended up writing somewhere between 13 and 25 episodes. Every week we would come in with a pitch for that week of the show. We would pitch our idea and they would give us the go-ahead.

The show was a half hour and each of the sketches only lasted 30 seconds, so we would write approximately 60 bits per show.

We would bring the script to the producer, who would read through it and tell us which bits would stay or which sketches we should take out.

What we didn’t know what that the producers would put the sketches back in, take the head writing credit, and pocket $1,200. Leaving the two of us with only $900.