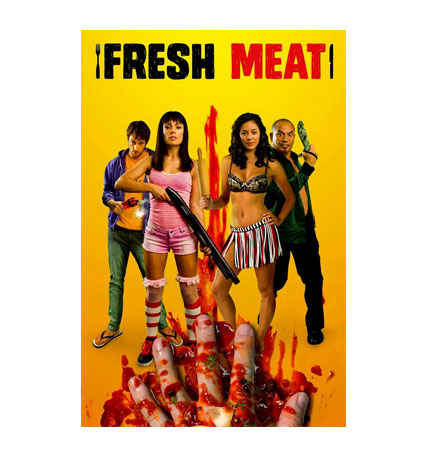 Fresh Meat is a New Zealand horror comedy film about a modern-day family of Māori cannibals who are taken hostage by a gang of criminals.

Check out the Trailer Below.

Blood and gore, slasher flicks and horror movies in general are not my cup of tea – I can barely watch trailers for the genre. If you look at my work I’m more of a fuzzy bunny sort of guy. When dealing with violent or graphic content I prefer to imply and leave things to the viewers’ imagination.

Back in 2001 I visited New Zealand on a FAM tour with a dozen or so Canadian Producers. There I met a producer named Dave Gibson – an affable enough gent whose company was doing factual programming as well as television drama at the time. I didn’t really see a fit between our companies. A couple of years later while attending the Atlantic Film festival, I met Donna Malane, a producer from Dave’s company. We chatted – did the old “what have you been up to?” routine – and she told me that they’d had an unexpected success with a film called “The Irrefutable Truth About Demons”. They were looking for a follow-up to it and she asked if I had any scripts in the genre that they might be able to look at. I told her that it really wasn’t a genre I was into and left it at that.

A few weeks later, a prolific screenwriter named Brad Abraham walked into my office with a stack of scripts. A stack of horror and slasher scripts to be specific. One that he’d written with his writing partner, Joe O’Brien, sounded interesting; it was called Hell For Breakfast. They considered it a dark comedy. The basic plot was “Murdering criminals break out of Prison and take the whitest of the “white bread” middle class family hostage – only to discover that that “white bread” family are cannibals. A typical “hunters become the hunted” story.

I forwarded the story to Dave in New Zealand and they were drawn to it. We entered into an agreement with the intent of doing a Canadian/New Zealand Co-production. Brad and Joe did a few re-writes, one of which was to set the film in New Zealand, where we would shoot the film. We kicked it around for a while, but I couldn’t get any of the funding agencies interested in it.

Dave figured that he could get it made strictly out of NZ – but that it was too white. He had the idea to alter the script and make the middle class family Maori instead of white, which I thought was a pretty risqué idea. But he brought on a Maori writer and she rewrote the script and went through several years of re-drafting and refining. Finally after 10 years, multiple rewrites, and a complete rethink of the concept, Dave made got the movie made.

Which is how I ended up with an Exec Producer credit on a movie that I could barely watch the trailer to.