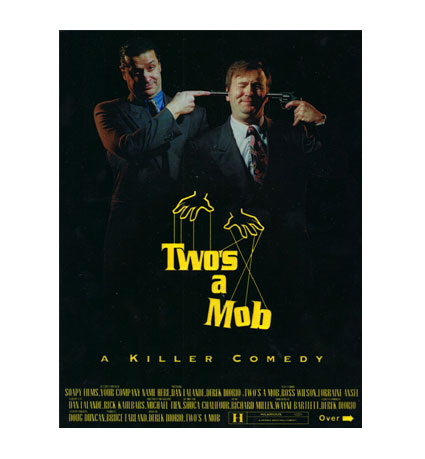 A misfit crime family rises to the top and struggles to stay there.

Two’s a Mob was the first stab at figuring out how to make a movie and raise money.

I’d been doing a lot of corporate videos and continued to do comedy projects, but wanted to make take the leap into making a movie and evolve as a director.

My lawyer at the time was a fellow named Jamie Wiley, who was one of the original members of Stage Fright. We amalgamated Stage Fright and SkitComCorp, into Skit Row. Jamie and I were both respective leaders of our organizations. Jamie was more a lawyer than he was a comic, so Jamie went off to become a lawyer and I went off to lead various iterations of comedy troops and projects and I ended up directing myself in a movie which was interesting. It was also the first film I’ve ever done as a performer and I learned a lot.

At the time I’d done a lot of stage work and I fit the description of the character that was written around a Skit Row sketch format. We wanted to do a take on all the movies that were hot at the time which were movies like Naked Gun, Hot Shots, etc except no one had done one in the mob genre yet. So Jamie put me in touch with an investor that might have money to put into a film.

He had a lot of clients who had money in the high-tech business in Ottawa. He put me in touch with this gentleman who picked me up in his Hummer and brought me to this restaurant. As we sat in the restaurant the investor turned to Jamie and asked why we were there. Jamie gave him the run down and I pitched him the idea, as well as a history of Skit Row and all the other comedy I had my hands in.

That was how we ended up financing Two’s a Mob, which was our first feature film.

I really wish I could go back and remake all my first five films because I got someone to pay for my film school. The part they don’t teach in film school is how to raise money which is the hard part. I didn’t know anything about making films before that.

So here’s some advice. Go to film school first, then raise a whole bunch of money.